In January of this year we had indicated that the US FDA had approved 59 NMES (new medical entities) in 2018 topping its previous record of 53 back in 1996. More recently a report by IQVIA Institute for Human Data Science showed that Big Pharma companies have not been the major contributors of truly innovative drugs although their R&D budget are huge. From the 59 new drugs approved the Big Pharma were the filing companies for fewer than half of the launches whereas emerging companies were the originators of 38 of the 59 new therapies (64%). Clearly the numbers do not reflect the medical importance of new therapies and the IQVIA report states “the importance of large pharma in originating molecules is decreasing but they remain important partners for biotech”. They see the need to team up will smaller companies for the discovery and the early stages of development and make their major contributions in the late stages of development and the filing of drugs. But there too the IQVIA report states “The dynamics of development, seem to be shifting, and emerging companies are retaining control of their assets to a greater degree”.

But Big Pharma are still the big spenders in drug R&D and in 2018, for the first time the top 15 largest companies by sales have invested more than $100 billion into research and development. Within the top 10 R&D budget the names have not changed since many years with 5 European companies and 5 American companies and Roche leading the pack with a $11 billion spend in R&D in 2018. The following table gives more details of the R&D spending as well as the R&D as percentage of revenue.

Roche which has been on top of this list for several years (it also includes its diagnostic business), did spend half a million less than in 2017. Investements in many combination trials in oncology have also sustained the increase in budgets also they will not contribute to the launch of new NMES. In 2018, Merck & Co has topped Novartis in spending $9.75 billion up from $7.19 billion in 2016. This coincides with more than 1,000 ongoing clinical trials with its cancer drug Keytruda. Takeda the largest Japanese company, in spite of the Shire acquisition, still does not appear in the Top 10 companies. 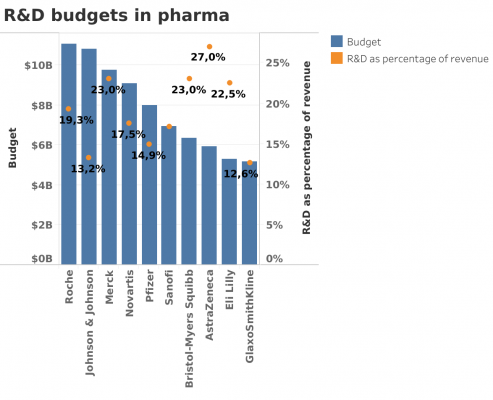