The outbreak of a viral pneumonia of unknown aetiology, which most probably emerged following a primary infection in a fish market in Wuhan, in the province of Hubei, was announced on December 30, 2019 by the Chinese authorities.

Since then massive efforts have been performed by scientists, medical and healthcare communities, Chinese and International authorities and communities. On January 9, 2020, Chinese authorities announced that the cause of the viral pneumonia was due to virus named 2019-nCoronavirus (2019-nCoV), a new type of coronavirus, different from SARS which emerged in 2003 in Hong Kong and from MERS which emerged in 2012 in the Middle East The immediate publication on “open source” by Chinese scientists of the complete sequence of 2019-nCoV, which represents a great achievement in such a short time, triggered massive efforts by the international scientific community in order to overcome what was rapidly considered as a major worldwide pandemic health threat.

We wish to report on ongoing known activities and progress in R&D, diagnostics, vaccines, therapies as well as efforts for detection and containment work of the virus.

As already mentioned, on January 10, 2020 more than 5,000 scientists had received the full sequence of the virus genome and started investigating its nature, particularities and features related to a specific and accurate identification of 2019-nCoV. The sequence of such a genome is now a crucial step for the development of a specific diagnostic test and the identification of potential treatment options. For instance, on January 24, 2020 the Institut Pasteur in Paris received samples of three suspected cases arriving in France upon returning from China. The same day scientists launched the process of sequencing the viral genome based on the samples and three days later data analysis confirmed the whole sequence of 2019-nCoV and the Institute shared the data worldwide. As well as sequencing the 2019-nCoV genome, the Institut Pasteur continued work on the samples from the confirmed cases and initiated rapid cell-culture isolation of the virus. Scientists at the Pasteur Institute have already paved the way for new diagnostic, therapeutic and prophylactic approaches as they did in the 1980’s when confronted with the emergence of human immunodeficiency virus infection and acquired immune deficiency syndrome (HIV/AIDS). Around twenty other sequences of 2019-nCoV have been obtained worldwide and indicate that the virus did not need to mutate in order to adapt and spread. The rapid efforts have now forged tools for a specific 2019-nCoV diagnostic to be used worldwide.

Every single company involved in the vaccine business has also immediately tackled the subject and tested if the jabs that had on their shelfs to prevent SARS, MERS, Ebola or other new emerging viruses had some efficacy to prevent 2019-nCoV dissemination. Although no immediate positive answer was disclosed, several companies announced that they expect to provide an effective vaccine within less than one year.

On January 30, the WHO (World Health Organisation) declared a global health emergency as the coronavirus outbreak was spreading well beyond China and as nearly 10,000 cases had been reported worldwide.

Various companies involved in the discovery of new and well identified antibodies also entered the field. One of them is Regeneron (Tarrytown, USA) which announced an expanded collaboration with the US Department of Health and Human Services (HHS) to focus on discovery, research, development and manufacturing of antibodies now including 2019-nCoV. The effort uses VelociSuite technologies to facilitate swift identification of promising antibody candidate, as was done for Ebola.

One other classical approach to tackle a virus, is the use of antiviral treatments. Chinese researchers from the Wuham Institute of Virology and National Engineering Research Center for the Emergency Drug claimed that they have found a total of seven drugs which were active in vitro against the 2019-nCoV virus. In a letter to the editor of Nature the authors published data “Notably, two compounds remdesivir (EC 50 = 0.77 µM, CC50 > 100 µM, SI > 129.87) and chloroquine (EC50 = 1.13 µM, CC50 > 100 µM, SI > 88.50) potently blocked virus infection at low-micromolar concentration and showed high SI”. Chloroquine in an antimalaria treatment, whereas remdesivir is an experimental antiviral agent developed by Gilead which failed as an Ebola drug. Gilead is working with Chinese authorities to immediately start a randomized controlled clinical trial with remdesivir. According to BioCentury, nine clinical trials are already underway to evaluate different combinations of approved antivirals ad corticosteroids including HIV drugs such as AbbVie’s Kaletra/Aluvia and Gilead’s Descovy.

Humans have known for centuries that detection and containment are key to control a pandemic spreading.  A soon as the Chinese authorities became conscient that the virus was indeed spreading fast and killing people, they closed access to the city of Wuhan in spite of the Chinese New Year Celebration and later on enforced an unprecedented quarantine on the entire region of Hubei which consists of more than 50 million people across 15 cities. In the last days of January several major airline companies have suspended all their direct flights to mainland China. In the meantime, several thousands of non-Chinese people had to be evacuated from the epicentre of the coronavirus in the Wuhan area and brought back to their home countries in the USA, Canada, France and Japan through chartered planes. Passengers are monitored and checked repeatedly during theirs flights and once they arrive at destination they are all screened and placed under a 14 day-mandated quarantine to isolation locations. Quarantine now also applies to all passengers coming on direct flights out of China. The outbreak also occurred on two cruise ships with more than 7,300 people now being quarantined and docked in Hong Kong and Japan with at least 61 people who have tested positive in the cruise ship docked in Japan.

As of February 7, 2020, there were 29 258 confirmed cases of 2019-nCoV infected subjects in more than 25 countries and 638 deaths (all in mainland China expect for two), including Doctor Li Wen Liang, the 34-year old Chinese doctor who, in December, warned fellow medics of a virus he thought looked like SARS and was then told by police to “stop making false comments” and was investigated for “spreading rumours”. What happens to the dead bodies? According to a Chinese source, they are immediately incinerated, but families cannot recover the ashes. Although the 2019-nCoV death toll in the Hobei region is dramatic and high (more than 600 in one month), it needs to be replaced in the more general context of 50 000 people dying every month from various diseases and ageing in the region. According to worldwide health authorities 1 341 subjects have already fully recovered from the infection. 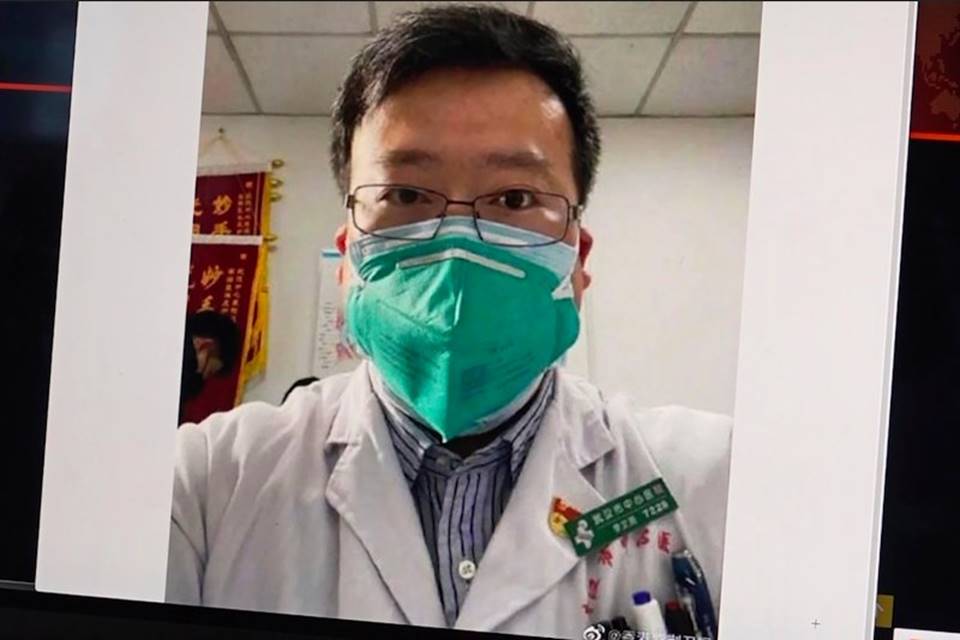 This image from video shows a selfie of Dr. Li Wenliang.

Chinese authorities have now to cope with the rapid spreading of the disease in the Hubei region. They have already provided a 1,000 beds hospital build within ten days and have committed to deliver another one of 1,600 beds on January 7th. From external sources one now knows that there is a lack of hospital beds, equipment, materials and possibly healthcare resources in that region.

The Chinese central government is under strong political and economic pressure to get the epidemic under control as fast as possible as the outbreak is now infecting some 2, 000 people daily in China.  It has recently authorized the use new technologies such as drones to identify people with high temperatures through thermic cameras and use drone’s microphones to disseminate specific instructions to dedicated areas as well as humanoid robots to deliver food to contaminated subjects in Wuhan hospitals in order to avoid healthcare givers to become infected.  Recent pictures disseminated by medias show how Chinese local authorities have launched massive disinfection campaigns in airports, railway stations and streets of several cities and villages where the disease is spreading fast.  On January 5, the Chinese government announced “it will spray disinfectant on the entire city of Hungshi, a city in Hubei province that neighbours Wuham and host nearly three million residents. People are banned from going out past 9pm when trucks will start spray the streets with disinfectants. Most of these campaigns are again monitored with drone supervision and reported back to authorities. 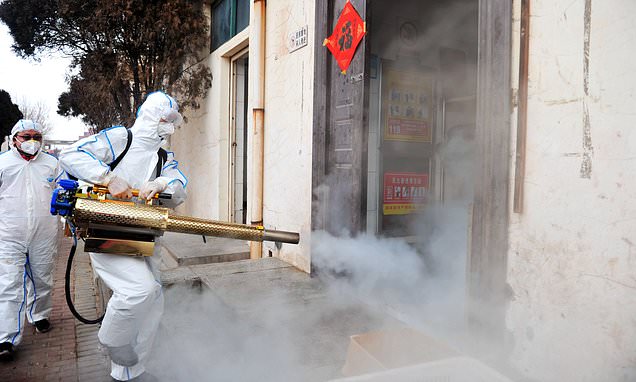 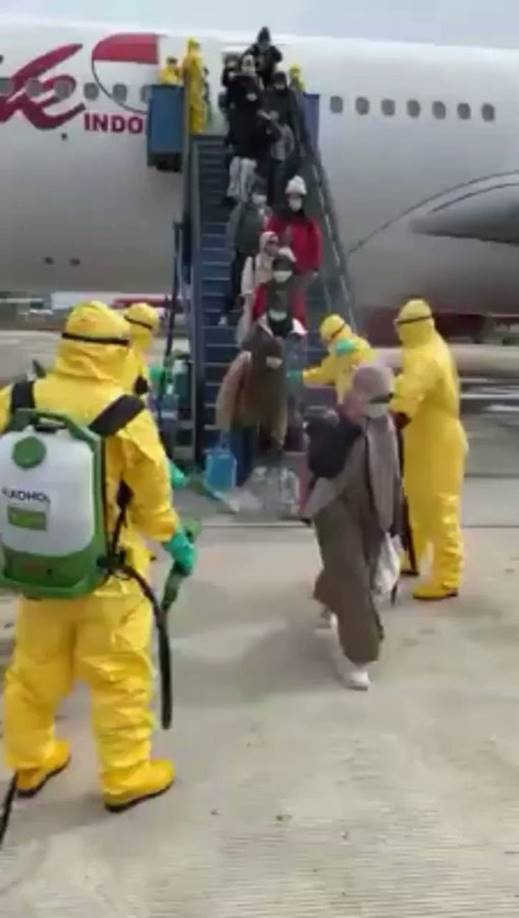 Nobody knows when the outbreak will peak in China, if a massive global pandemic and if a “worst-case scenario” will occur in spite of the strong containment and disinfectant campaigns. Experts consider that thorough analysis of the spreading of infected subjects and death toll in weeks seven and eight 2020 will allow them to make a more accurate assessment of the situation and of the spreading of the pandemic in mainland China and abroad.  The fear is not just limited to health, but global commerce now hinges on China‘s $14.45 trillion economy and its international trade. This morning, Chinese President Xi Jinping told President Donald Trump that China was “fully confident and capable of defeating the epidemic”.

Unexpectedly the 2019-nCoV outbreak may now accelerate the current strategic approach of many international companies when considering their overall supply chain of goods and materials coming mainly from China.