China approves Oligomannate for the treatment of Alzheimer’s disease

China approves Oligomannate for the treatment of Alzheimer’s disease

Shanghai Green Valley Pharmaceuticals (Green Valley) announced that China’s National Medical Products Administration (NMPA) has given a conditional approval to Oligomannate (GV-971) as a new drug for the treatment of mild to moderate Alzheimer’s disease and improving cognitive function. The drug is expected to reach the China market by year end. Green Valley is planning to start a multi-national, multicentric phase 3 in the US, Europe and other parts of Asia in 2020.  The news got immediate worldwide attention and a lot of suspicion in view of the numerous failures encountered by western biopharmaceutical industry in this field.

The development of Oligomannate, was triggered by the observation that elderly people who regularly consumed seaweed had a lower occurrence of Alzheimer’s disease. The Chinese research team, led by Dr. Geng Meiyu, at the Chinese Academy of Sciences’ Shanghai Institute of Materia Medica, back in 1997, identified a unique sugar – GV-971, a mixture of acidic linear oligosaccharides from dimers to decamers (molecular weight up to ~1kDa) –  in seaweed which might play a major biological role.  It took almost twenty years to explain the mechanism of action of the drug. In September of this year Dr Geng’s team published an article in Cell Research entitled “Sodium oligomannate therapeutically remodels gut microbiota and suppresses gut bacterial amino acids-shaped neuroinflammation to inhibit Alzheimer’s disease”. The article was confirming what Traditional Chinese Medicine has known for centuries: namely a strong  brain-gut connection. The article also confirmed that Oligomannate was not directly acting on the amyloid beta/tau pathway and stated: “During AD progression, the alteration of gut microbiota composition leads to the peripheral accumulation of phenylalanine and isoleucine which stimulates the differentiation and proliferation of pro-inflammatory T Helper 1 (Th1) cells. The brain-infiltrated peripheral Th1 immune cells are associated with the M1 microglia activation, contributing to AD-associated neuroinflammation. GV-971, a sodium Oligomannate, suppresses gut dysbiosis and the associated phenylalanine/isoleucine accumulation, harnesses neuroinflammation and reverses the cognition impairment”. In short, Oligomannate not only reduces the accumulation of two amino acids and the infiltration of immune cells to the brain, but also regulates the bacterium colonies in human intestines to reduce the risk of brain inflammation. Professor David M. Holtzman, Chairman of Department of Neurology and director of Hope Center for Neurological Diseases at Washington University in St Louis wrote “ the preclinical data supports the emerging idea that modulation of the gut microbiome via treatment such as GV-971 or other strategies should be further explored as novel strategies to slow the progression of AD”.

The phase 3 clinical trial, supportive of the approval, is a multicentre, randomized double-blind, placebo-controlled, parallel-group 36 week study conducted in 34 hospitals across China. A total of 818 patients with the diagnosis of mild to moderate Alzheimer’s disease completed the study which was conducted in collaboration with IQVIA and Signant Health. The results indicated that Oligomannate statistically improves cognitive function in mild to moderate AD patients as early as week 4, with sustained benefit at week 36. The mean difference between Oligomannate and placebo groups in ADAS-Cog12 score was 2.54 (p < 0,0001) at the end of 9 months treatment (see chart) and the drug was safe and well tolerated. These results had already been presented by Dr. Geng’s group at the Clinical Trials on Alzheimer’s Disease Conference in Barcelona last year but received rather little attention at the time.  Independent analysts rightly point to the fact that Oligomannate only showed one positive subjective measure -ADAS-Cog- with non-significant trend for improvement on CIBIC-plus and demonstrated no difference against placebo in two relevant measurements known as ADCS-ADL and NPI. In addition, nothing is known about physiological changes such as level of toxic clumps of amyloid beta and tau proteins. The US FDA guidance for Alzheimer’s drugs specifically claims “a finding on a single test unsupported by consistent findings on other tests would be less persuasive compared with beneficial effects demonstrated across multiple test in patients with early clinical stages of Alzheimer’s”. As a conditional approval, Green Valley is now “required to continue research on pharmacological mechanisms and long-term evaluation on safety and effectiveness of Oligomannate” by Chinese Health Authorities. The company stated that a manuscript describing the results of the China clinical trial is under review by The New England Journal of Medicine with a decision pending later this year.

Dr Carol Routledge, Director of Research at Alzheimer’s Research UK, said:
“While it might sound strange for a potential Alzheimer’s drug to come from seaweed, many naturally occurring compounds provide the basis for developing medicines. Research suggests that this drug may work by affecting the activity of bacteria in the gut and there is growing evidence of an important link between the gut and the brain. Alzheimer’s Research UK is actively funding research investigating the link between the gut and Alzheimer’s in detail, which will help generate new targets for drugs.  It’s good to see that drug regulators in China are prioritising emerging treatments for Alzheimer’s, but we do still need to see more evidence that this drug is safe and effective. For any potential drug to gain a stamp of approval by regulators in the UK, we’ll need to see larger trials in countries around the world to back up the evidence from China. We must await full data from this study and further clinical trials before we can fully assess the potential of Oligomannate to improve the lives of people with Alzheimer’s disease.” 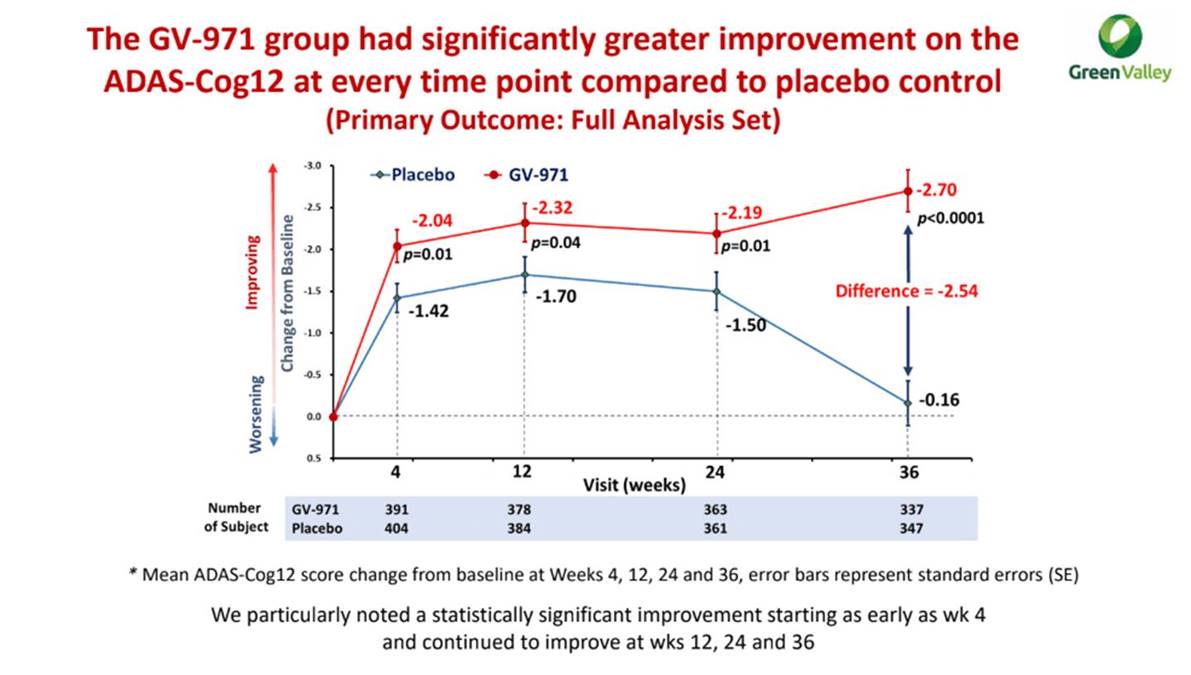