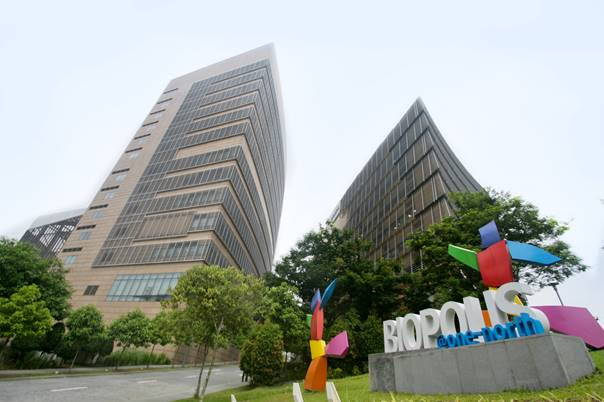 When Singapore’s then Minister of Trade and Industry George Yeo launched the Biomedical Sciences (BMS) Initiative in June 2000 with a budget of S$1.48 billion*, the day the US and the UK governments announced the first draft of the Human Genome Project, very few people believed that fifteen years later it would show the spectacular results achieved today. To find out how this was achieved we have interviewed NG Choon-Peng, Senior Director at A*STAR Biomedical Research Council (BMRC), while visiting Singapore in January.

How have they done it?

First things first: It started with a vision supported by Nobel Laureate, Professor Sydney Brenner, when he met with former Prime Minister Lee Kuan Yew, to build a biomedical sciences hub in Singapore and to grow it into an innovator that would become a world centre of excellence. “This was to be an experiment in developing state-of-the art biomedical research at a national level in what was a third world country not too many years before” said Prof. Brenner. During the 1997 Asian financial crisis, it became apparent to the Singapore government that they had to move away from a labour intensive and strongly manufacturing driven economy to a knowledge and innovation based economy. “Our leaders, at the time, had the vision that biomedical sciences would become a major driving force for our economic growth” said NG Choon-Peng. This strong commitment of Singapore to biomedical sciences is reflected in the construction of the Helix Bridge (previously known as the Double Helix Bridge), the pedestrian bridge, inaugurated in April 2010, which links both sides of Marina Bay area, currently the most visited place in the city (The intentional left handed DNA design is coloured with c, g, a and t – the letters of the four bases of DNA which are lit up at night in red and green). 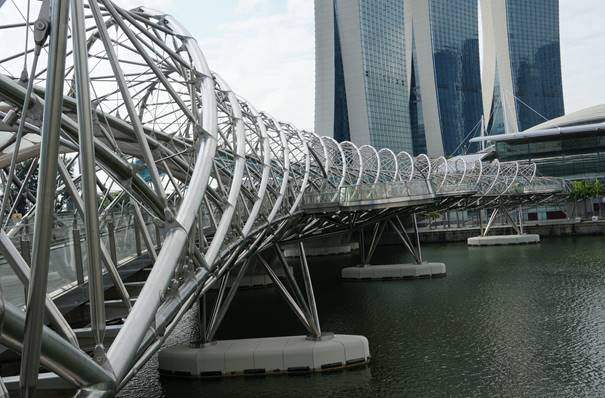 The Helix Bridge in the Marina Bay

It continued with a strategic master plan.  Before moving ahead with major investments, a team of scientists and politicians, went to study the most famous biomedical research institutes in the world. They quickly realized that what Singapore needed was more than building expansive new brick and mortar facilities and launching new institutes. It needed the establishment of a fully-fledged biomedical hub, in other words a state of the art infrastructure which would attract top researchers and academics, where creativity would be generated as it does in only a few places in the world such as Boston and San Diego.

Phase 1 (2000-2005) of Biopolis was completed in 2005 with the building of a number of biomedical sciences institutes on 200 hectares land in Buona Vista close to the the National University of Singapore, The National University Hospital, the Lee Kong Chian School of Medicine and the Duke-NUS Graduate Medical School. During this early phase most of the space was dedicated to public research buildings, although co-location of public-private research institutes was encouraged. This phase also included the recruitment of some top-notched veteran scientists to lead the various institutes.

In Phase 2 (2006-2010) Translational and Clinical Research capabilities became the main focus and related programmes were supported with a budget of S$1.55 billion. In addition emerging research such as neuroscience and immunology was developed and most of the new Biopolis facilities were marketed to private companies

During Phase 3 (2010-2015), efforts were focused on attracting new business opportunities, new scientists, while integrating more deeply the different types of expertise that already existed in the Physical Sciences and Engineering Departments and the Biomedical and the Biological Sciences. The “attractive effect” has been successful with the settlement at the center of Roche, Novartis, GSK, Chugai, P&G, ArKray, Flugidim, Nestlé, Danone Nutrica Reseach, L’Oréal just to name a few.

The latest R&D funding plan, Research, Innovation and Entreprise (RIE) 2020 was recently announced with a hefty S$4 billion dedicated to the domain of health and biomedical sciences. This represents 21% of the S$19 billion Singapore is investing into public R&D during this period. The Biomedical Sciences intends to “propose a Singaporean solution to a complex biomedical problem” according to NG Choon-Peng who indicated some of the key priorities of this five years plan.

Enforcing the Singapore research ecosystem within the biomedical industry to transform it into a highly innovative, productive driving force for economic growth. This is already partially achieved when analysing recent economic data. In 2014, the Biomedical Sciences manufacturing value-added in Singapore generated US$10 billion or 3.2% of the overall 2014 GDP US$ 307.9 billion and has created around 25,000 new jobs in the last ten years. Singapore has been able to attract more than fifty manufacturing plants (nine of them producing biologics), establish around fifty new research facilities and locate more than thirty regional headquarters of multinational companies in the field. “Today Singapore is recognized as a leading manufacturing location for pharmaceuticals and biologics as well as various medical technology products ranging from life science tools to medical devices” said Yeoh Keat Chuan, Managing Director of Singapore Economic Development Board (EBD).

Attracting best academics, best scientists, best researchers from around the world and building a robust and diverse talent pool is also high on BRMC’s list.  “They want to learn from the best and benefit from the mentoring of renowned scientists” said NG Choo-Peng.  Since 2001 A*STAR (Agency for Science Technology and Research) has awarded more than 1,400 scholarships to develop Singaporean talent and 475 scholars have completed their PhD/postdoctoral training while also strengthening the international linkage. A*STAR and the National University of Singapore have provided full scholarships to 560 international students and 175 international students were provided with PhD opportunities under joint supervision of A*STAR and overseas universities. Discussions with young and older researchers that we know, who have recently settled into Biopolis have confirmed the ease of establishing there and praised “the plug and play approach” they were offered allowing them to be fully operational in their laboratories one week after arriving in Singapore.

BRMC has now decided to leverage the spectrum of its core capabilities such as pharmaceuticals, biotechnology & biologics, medical technology, nutrition & personal care with electronics, micro-engineering, chemical & materials and info-communication, in fully integrated interdisciplinary programmes looking for convergent solutions of complex problems. “The funding will now be focussing on such integrated innovative convergent programmes rather than on new institutes” said NG Choon-Peng.

Clearly these achievements could not have been reached without strong incentives and a flawless execution of the master plans. For foreign companies it has always been very clear that there is a strong tax benefit, which can be negotiated case by case with the local authorities depending of the level and the amount of investment made in Singapore. The most favourable one occurs when a company invests in a R&D facility, a manufacturing and trade facility and a regional headquarter. To make sure that all public R&D investments are most efficiently allocated to support future growth of the Singaporean economy, the government has implemented a technocratic top down governance body which supervises the current S$19billion allocated for the Research, Innovation & Enterprise (RIE) Plan 2020 (2016-2020) as well as the previous ones. The RIE Council is chaired by Prime Minister Lee Hsien Loong himself and the council steers the R&D activities in Ministries (Education, Health, Trade and Industry), public funding agencies (National Research Foundation, EDB Singapore, A*STAR and Spring Singapore) as well as all research performers (Universities, Polytechnics, Hospitals and Research Institutes). This system is fundamentally different of the one of most western countries heavily focusing on funding biomedical innovation, where the operational governmental involvement is far less intrusive.

Not a perfect world yet

As described above, much has been achieved since April 2000 although it is not a perfect world yet. In terms of tangible research outcomes more could be expected. The building of a strong biopharmaceutical manufacturing hub is a real success but, so far, this is not the case in terms of innovation. Biopolis now hosts 53 companies and 5,600 employees, but right now, only a few biopharmaceutical spin off companies were launched and only a couple of novel diagnostics, discovered and developed at Biopolis, have already reached the market. This is not to say that no additional outcomes have been reached. In collaboration with Roche, A*STAR scientists have developed a Severe Acute Respiratory Syndrome (SARS) detection kit. Another team in collaboration with Cytos Biotechnology, now Kuros Biosciences Ltd, has made substantial progress towards a made in Singapore H1N1 flu vaccine. The same is true with a novel experimental Dengue vaccine, in development with the Novartis Institute of Tropical Diseases. In July 2015, A*STAR announced the start of a phase 1 study with ETC-159, a novel cancer drug, as the first publicly-funded drug candidate discovered and developed in Singapore.

What is still missing is a complete value chain from laboratory to commercial network and a comprehensive ecosystem where all the players requested to foster and support biomedical innovation are present. To the best of our knowledge this is still not the case in Singapore. According to well-informed sources close to the business, the current investment is again on the rise, but funding into innovation had significantly slowed down at some time, several institutes did not develop their programmes at full speed, foreign talents did not stay long enough and there is still today an insufficient pool of local talents. We have met with young talented scientists, but we have not been exposed to determined entrepreneurs. In addition, as for Scandinavian countries or for Switzerland, the local market is too small to rapidly recoup the heavy investment made in biopharmaceutical sciences and it therefore requires a very aggressive and thoughtful strategy to leverage the created value outside of Singapore. We know that quality business schools such as Singapore Management University, INSEAD or ESSEC are operating close to Biopolis, but we are not sure that many scientists are following some of their MBA courses. We were told that the number of biomedical dedicated Singapore Capital Ventures firms and business analysts is still low. In terms of recent IPOs we only know of iX Biopharma, which was listed on the SGX Catalist market (a platform for fast growing local and international companies) in July 2015, and of Invitocue, which was relisted on the Australian Stock Exchange in January 2016. Several Singaporean companies are also considering Hong Kong, Taiwan or the NASDQ to become publically traded. “Rome was not built in a day” and so will it be for the innovative Biomedical Industry from Singapore.

A young talent pool of academics and researchers has recently joined Biopolis and a new generation of local scientific leadership has emerged alongside senior scientists previously recruited from abroad. Finding original and innovative solutions to complex biological and biomedical problems will only become possible through open innovation and interdisciplinary collaborative efforts between public and private core competencies build around long standing and trustful collaboration. We have already seen first efforts along this way. One of them, named POLARIS, a technology platform aimed at discovering and developing new biomarkers for diagnosis, prognosis and treatment, will benefit from a stratified medical approach of the Singaporean multi-ethnic population of millions of Chinese, Malays and Indians, representative of Asia. Educating scientists to become entrepreneurs needs time and effort and will require coaching from seasoned veterans who have been successful in the domain in other parts of the world. Massive public investment has been secured since 2000 and is increasing again recently. Private business angel funding and equity funding needs to be substantially increased in order to foster far more start-up companies to support their own programmes while becoming public.

Although nobody can deny that Singapore has come a long way very fast, a fully-fledged well integrated ecosystem still needs to be secured and rapidly implemented if the Biomedical Research Singapore adventure wants to become competitive with the research excellence hubs located in Cambridge/Boston, in the San Francisco Bay, in San Diego, in the golden triangle around London, Cambridge and Oxford or in the Shanghai Pudong Zhanjiang Hi-Tech Park. Using a French Cuisine metaphor one could say: “All the rights ingredients are on the kitchen table to succeed in making the most tasty mayonaise”