In the last edition of the New England Journal of Medicine, a French team reports the first case of a Zika virus associated meningoencephalitis in a 81-year-old man, 10 days after he had returned from a cruise in the South Pacific.

World Health Organization (WHO) Director-General Dr. Margaret Chan said “reports and investigations in several countries strongly suggest that sexual transmission of the virus is more common than previously assumed.” WHO recommends pregnant women avoid travel to areas with ongoing Zika outbreaks and that if their partners travel to affected countries, they should practice safe sex or abstain from sex for the duration of their pregnancy.

US FDA recommends that people who have diagnosed positive with Zika virus infection to become ineligible as donors of blood and tissue-based products.

Sanofi Pasteur and Merck & Co announce the termination of their 50/50 joint venture named Sanofi Pasteur MSD (Lyon, France) established in 1994 which was developing and commercializing vaccines in 19 European countries. Upon concluding their joint venture, both companies plan to integrate their respective European vaccine businesses into their operations, independently manage their product portfolios and pursue their own distinct growth strategies in Europe.

Royalty Pharma (New York City, NY, USA) acquires a portion of future royalty rights, for $1.14 billion in cash, from the University of California Los Angeles (UCLA) for Xtandi, or enzalutamide, a prostate cancer drug, which was approved in 2012 and has generated sales of 1.15 billion in 2015 as reported by Astellas Pharma. The rights to Xtandi were jointly owned by UCLA, researchers working at UCLA at the time of the discoveries and an undisclosed research organization. UCLA shares are estimates at around $520 million and according to the Los Angeles Times ”The move to buy into the royalty stream in exchange for upfront cash represents a cash infusion for future research programs for UCLA as federal and state revenues drop.”  Royalty said that it holds total assets of more than $15 billion that includes royalty interest in 40 products such as Humira, Remicade, Lyrica, Prezista, Truvada, Januvia, Tecfidera, Imbruvica, Kalydeco and Orkambi.

Canon is in exclusive negotiations for the acquisition of Toshiba Medical System, until March 18, in a deal valued at around $6 billion. Others interested companies were Sony, Konica Minolta, Bain Capital and UK’s Permira.

AbbVie acquires rights from Boehringer Ingelheim to develop BI655066 and BI655064 for the treatment of immune diseases such as psoriasis and Crohn’s disease for $595 million. Under the terms of the deal, AbbVie will pay $595 million upfront plus undisclosed milestone fees and sales royalties. Boehringer will lead development of BI655066, an anti- IL-23 antibody, and AbbVie will be responsible for marketing of the drug and will have the option to advance BI 655064, a CD40 antigen inhibitor.

Specialised Therapeutics (Melbourne, Australia) sublicense rights to market anti-emetic drugs Aloxi or palonosetron hydrochloride and Akynzeo, a fixed combination of netupitant- a NK1 receptor antagonist- and palonosetron – a 5-HT3 receptor antagonist- for Australia and New Zealand to Mundipharma (Melbourne, Australia). Both drugs had been approved in Australia under a license from Helsinn Healthcare (Lugano, Switzerland)

CSL Behring’s (King of Prussia, PA, USA) Idelvion, the first and only factor IX therapy that offers up to 14 days protection to haemophila B, a rare inherited disorder that prevents blood from clotting normally, leaving patients at risk of potentially serious bleeding. Idelvion is a recombinant Factor IX Albumin Fusion Protein.

….and Boston Scientific’s Blazer-Open Irrigated radiofrequency ablation catheter to treat atrial flutter, an abnormal heart rhythm that causes the heart to beat too fast, potentially leading to congestive heart failure, heart attack or stroke. Localized electrical energy is delivered through the tip of the catheter's electrode, the resulting heat destroys the heart tissue that is responsible for atrial flutter. 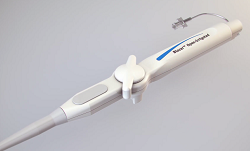 US FDA extends the use of Janssen and AbbVie’s Imbruvica to include it as first-line use in chronic lymphocytic leukemia (CLL) offering patients the first chemotherapy-free option.

US FDA grants fast-track status to:

….and Omeros’ (Seattle, WA, USA) Omidria, a phenylephrine and ketorolac injection for the treatment of thrombotic microangiopathies, a blood and kidney disease.

US FDA grants orphan status to:

…and AstraZeneca’s MEDI-551 as a treatment for patients with neuromyelitis optica as well as neuromyelitis optica spectrum disorders, Neuromyelitis optica is a rare, life-threatening autoimmune disease of the central nervous system in which the body’s immune system attacks optic nerves and spinal cord, resulting in severe damage for which there is currently no cure. MEDI-551 is a humanized monoclonal antibody that binds to CD19, a protein expressed on a broad range of B cells, including plasmablasts.

Novartis Cosentyx, or secukinumab – an IL17 antibody- comes out superior to Johnson & Johnson’s Stelara, or ustekinumab, in comparing their efficacy in a 52 week head-to-head study in skin clearance in adults patients with moderate to severe psoriasis.

Sanofi/Regenron’s sarilumab, a monoclonal antibody that binds to the IL-6 receptor, has demonstrated clinical superiority against AbbVie’s Humira or adalimumab in rheumatoid arthritis. The companies indicated that sarilumab met its primary endpoint as well as its secondary endpoint in improving signs and symptoms in patients with active rheumatoid arthritis. On the safety side, the incidence of adverse events serious adverse events, infections and serious infections was similar between both drugs.

Smartphones tailored specifically to improve clinician workflow are helping New York-Presbyterian Hospital boost communication efforts and cut back on waste, according to Director of Nursing Informatics Rosemary Ventura. She said that while previously nurses were expected to carry around bulky electronic tools such as barcode scanners, radios and tablets, as well as wear a tool belt, the smartphone now combines many of their needs into one device.

According to an EvaluatePharma report on Japan Sales:

Like most other countries China, the world’s second market at $115 billion, is making a push to get drug cost increase under control. According to a Bloomberg report, Li Bin, director of China's National Health and Family Planning Commission, said the price reductions over 50% were achieved in recent tender rounds of national-level bargaining for "expensive" imports in areas such as oncology, although no drugs were specifically named.

According to a survey (The Corporate Reputation of Pharma – from the perspective of 550 European-based patient groups) performed by PatientView on 48 companies, the reputation of the biopharmaceutical industry is increasing in 2015. The study bases its reputation findings on patient centricity, patient information, patient safety, useful products, transparency, and integrity. 45% of responding patient groups agreed that pharma had an "excellent" or "good" corporate reputation in 2015, compared with 39% in 2014, and 34% in 2012. Another 28% of the patient groups said pharma's reputation had improved during the year and 72% of them said that pharma as a whole was “Excellent” or “Good” during the year at producing high-quality products. On the downside, 45 % said the industry was poor at having fair pricing policies and was making excessive profits.

ANSM, the French regulatory body, has banned Theravectis (Villejuif, France) from manufacturing candidate vaccines and immunotherapies at its facility until September 2016, after inspectors observed 45 deficiencies from good manufacturing practices (GMP), five of which described as critical.

Merck & Co and Gilead are battling in court over Gilead’s hepatitis C medications royalties.  Merck claims that it is entitled to 10% royalties on Gilead's sofosbuvir based drugs, including Sovaldi and the combination drug Harvoni, citing two patents registered in 2002. Gilead, on the other hand, claims that its Pharmasset scientists were already working on sofosbuvir before the patents were filed. Merck's royalty claim, first made in 2013, would be worth more than $3 billion, based on the $31.7 billion sales made by Gilead. In February of last year, Doctors of the World also submitted an objection to Pharmasset’s patent at the European Patent Office, claiming that the structure of sosfosbuvir is based on already know chemical structures previously invented by McGuigan and his team at the Cardiff University in the UK.

Give us your feed-back on the biopharmaceutical News !

see other Pharma & Biotech events in 2016