Merck & Co acquires Afferent Pharmaceuticals (San Mateo, CA, USA) in a deal worth up to $1.25 billion, giving access to AF-219, a selective, non-narcotic, orally-administered P2X3 antagonist, currently evaluated for the treatment of refractory, chronic cough, as well as for the treatment of idiopathic pulmonary fibrosis with cough. P2X3 receptors are believed to play a key role in the sensitisation of certain sensory nerves, when ATP is released in high concentrations due to cellular distress following injury or infection.  Under the terms of the deal Merck will make an upfront payment of $500 million and as much as $750 million in various contingent milestones

enters a collaboration and an option to license with Genisphere (Hatfield, PA, USA) to develop nanoparticles using Genisphere 3DNA platform. The technology makes strands of DNA linked together with complementary sequences into a structured mass of genetic material. The end product can hold a drug in its scaffold of DNA as well as antibodies on its surface, giving it both vehicular and targeting capabilities. Under the terms of the deal AstraZeneca makes an upfront payment and royalties on future sales.

…and signs an agreement with Foundation Medicine (Cambridge, MA, USA) to develop a novel companion diagnostic for Lynparza, or olaparib, a first-in-class poly ADP-ribose polymerase (PARP) inhibitor designed to exploit tumour DNA repair pathway deficiencies. The drug is currently approved in the US for the treatment BRCA-mutated advanced ovarian cancer and in the EU for patients with ovarian, fallopian tube or primary peritoneal cancer.

Takeda (Osaka, Japan) signed a worldwide licensing deal with Theravance Biopharma (Dublin, Ireland) to develop and market TD8954, a selective 5HT-4 receptor agonist, for the treatment of gastrointestinal motility diseases, including enteral feeding intolerance (EFI).  TD-8954 is being developed for short-term use with EFI to achieve early nutritional adequacy in critically ill patients at high nutritional risk. The compound has received US FDA’s Fast Track Designation in that indication. Under the terms of the deal Takeda will make a $15 million upfront payment and various regulatory and commercial milestones of up to $110 million, as well as double-digit royalties on future sales

….and invests $65 million in Ultragenix Pharmaceutical (Novato, CA, USA) to co-develop as many as six new products to treat rare diseases. Under the terms of a five-year agreement Ultragenyx will license and co-develop at least one candidate from Takeda and have an option to license up to five additional rare disease candidates, with Takeda eligible for an exclusive option to commercialize any products developed in Asia, along with an option to exclusively license one Ultragenyx’s pipeline treatment in Japan.

Skye Pharma (London, UK) buys Lucideon’s (Stoke-on-Trent) abuse-deterrent drug delivery technology to use in the development of a new formulation of an undisclosed opioid. SkyePharma will pay undisclosed milestones and single digit royalties on sales.

Merck KGaA enters a collaboration with Array Biopharma (Bolder, CO, USA) and Pierre Fabre (Castres, France) to assess the efficacy of the combination of Erbitux, or cetuximab, which targets epidermal growth factor receptor (EGRF) plus encorafenib, a RAF inhibitor with or without binimetinib, a MEK inhibitor.

Aptose Biosciences (Toronto, Canada) enters an exclusive global option and license agreement with CrystalGenomics (Seoul, South Korea) to co-develop CG026806, a first-in-class, noncovalent, small molecule inhibitor of Bruton’s tyrosine kinase (BTK), FMS-like tyrosine kinase 3 (FLT3), and Aurora kinases (AURK) for the treatment of various cancers. Under the terms of the deal Aptose Biosceinces will make payments of up to 303 million and get worldwide rights outside China and South Korea.

Innovent Biologics (Suzhou, China) enters a partnership with EpimAb Biotherapeutics (Shanghai, China) to develop bispecific antibodies. Under the terms of the deal, Innovent will get the rights to EpimAb’s Fabs-In-Tandem Immunoglobulin (FIT-Ig), a proprietary platform to develop multiple bispecific antibodies for China, and the rights to out-license outside of China in return for an upfront payment to EpimAb, with milestones potentially reaching $120 million. Innovent had entered a major deal with Eli Lilly last year.

Japan’s Ministry of Health, Labour and Welfare (MHLW) has recommended approval for Regeneron and Sanofi’s Praluent or alirocumab, a PCSK9 inhibitor, for the treatment of familial hypercholesterolemia, two month after Amgen and partner Astellas launched Repatha or evolucumab.

US FDA approves Allergan Byvalson, a fixed dose of nebivolol and valsartan for the treatment of hypertension. Both drugs were already approved in the US.

….and voted 14 to 3 to recommendand Teva’s Vantrela ER, an abuse-deterrent opoid, for the daily around-the-clock management of chronic pain.

US FDA Antimicrobial Drugs Advisory Committee, voted 10 to 5, to recommend the approval of Merck & Co’s Zimplava, or bezlotoxumab, as a treatment to prevent the recurrence of Clostridium difficile.

Sanofi/Regeneron’s dupilumab, an antibody that blocks both interleukin-4 and interleukin-13, for the treatment of moderate to severe atopic dermatitis with breakthrough status, met its primary and secondary endpoints in a late-stage phase 3 clinical trial. 64% of the patients treated with dupilumab weekly achieved a 75% reduction in eczema severity while 69% of the patients on the two-week interval achieved it.

Pfizer’s Xeljanz, or tofacitinib citrate, for the treatment of psoriatic arthritis, met its primary endpoint in a phase 3 clinical trial. Patients treated with tofacitinib showed a statistically significant improvement in their psoriatic arthritis compared to placebo as measured by ACR20 (20% improvement in symptoms) and HAQ-DI score (health assessment questionnaire).

GlaxoSmithKline and Janssen’s sirukumab, a human monoclonal IgG kappa antibody that binds to interleukin-6, for the treatment of rheumatoid arthritis, met both co-primary endpoints and all major secondary endpoints in a phase 3 clinical trial. Patients treated with sirukumab experienced significantly less joint destruction than placebo from baseline to week 52 as measured by a method called Sharp van der Heijde Score which measures joint damage by X-ray images. The sirukumab group was also superior to placebo in the proportion of patients achieving ACR20 (20% improvement in RA symptoms) at week 16.

GlaxoSmithKline’s Benlysta, or belimumab, showed high activity in systemic lupus erythematosus (SLE) with a significantly greater response to treatment with Benlysta (belimumab) administered via subcutaneous injection plus standard of care (SoC), compared to placebo plus SoC. 14.1% of patients in the belimumab group had a severe flare during the course of the study compared to 31.5% in the placebo group.

Amgen and Novartis AMG 334 or erenumab, a CGRP antibody, has reached its primary targets in terms of efficacy and safety to prevent chronic migraine, in a phase 2 clinical trial. These results are in line with previously reported results of drugs acting on CGRP from Lilly, Alder and Teva/Rinat. 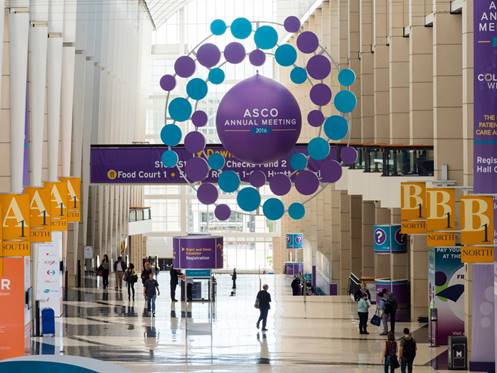 Johnson & Johnson/Genmab’s Darzalex, a treatment for multiple myeloma, significantly improved the outcomes when given in combination with Velcade and dexamethasone. The combination cut the risk of cancer progression and death by 61 % and increased the overall response rate to 83 % from 63 %

Roche’s Tecentriq, or atezolizumab, an immunotherapy for the treatment of bladder cancer, shrank tumours in 24% of patients previously untreated and could become a first-line treatment.

Bristol-Myers Squibb’s combination of checkpoint inhibitor Opdivo and immunotherapy Yervoy has shown that 57% of lung cancer patients treated with the combination responded versus 28% when Opdivo was given alone.

AbbVie and Stemcentrx’s Rova-T (rovalpituzumab tesirine) showed results with 18% of tumors shrinkage and 68% of evaluable patients with clinical benefits.

Novartis’ combination of Tafinlar (dabrafenib) and Mekinist (trametinib) showed an overall response rate of 63% in lung cancer patients with a BRAF V600E genetic mutation. Both drugs are currently approved for the treatment of BRAF V600E positive melanoma.

Juno Therapeutics and Kite Pharma have confirmed that they intend to bring their respective CAR-T therapies to the market in 2017 in view of their most recent results.

Theraclion (Malakoff, France) announces that Tübingen University has presented Ecotherapy efficacy results in breast fibroadenoma with complete destruction of nodules in 90% of patients 12 months post treatment with no vital fibroadenoma tissue. ”Echotherapy has initially been designed for volume reduction of a nodule, not for its complete destruction. These preliminary results show that there is reason to believe that by adapting the protocol, complete tissue destruction can be obtained” said Pr. Markus Hahn, senior author within the Tubingen group. Theraclion is specializing in high-tech medical equipment using therapeutic ultrasound. Drawing on leading-edge technologies, Theraclion has designed and manufactured an innovative solution for echotherapy, the Echopulse®, allowing non-invasive tumor treatment through ultrasound-guided high-intensity focused ultrasound.

GlaxoSmithKline has started investing and studying electroceuticals, known as bioelectronics, since 2012 with a fund of $50 million and expects to bring it first product to market in a few years according to a Bloomberg report. The theory behind electroceuticals involves using tiny implantable devices to effect biochemical changes in the body that are typically brought about by drugs. The devices could be used in combination with drugs or replace them. GSK is currently assessing early prototype in

US FDA Commissioner Robert Califf calls on industry to insure imported API quality and take responsibility of its own supply chain.  “We are revamping the inspections system, there will be many more inspections in India and China” adding the Agency is using “risk algorithm” technology to help the inspectors in their approach. “We are getting more and more data into the system and you will hear a lot more about that over the next six months. We are also working on mutual agreements with Europe so that we spend less inspections in Europe” he said earlier this week at the BIO convention in San Francisco.

In its annual report, China FDA's Center for Food and Drug Inspection (CFDI) said the number of applications from firms for good manufacturing practice (GMP) certification reviewed by the end of the year fell to 221 from 482 in 2014 and from a 5-year high of 584 in 2013. Nine of the 221 reports reviewed failed inspection, but the number of firms that received warning letters during the year reached 68, or nearly 31% of the total, a continued uptick from 30.3% the previous year and almost double the 17.8% in 2013.

Merck & Co versus Gilead Sciences hepatitis C patent: Round 2. In our newsletter #12 we had indicated that Merck won a first round in its royalty fight with Gilead’s hepatitis C drugs Sovaldi and Harvoni and would collect up to $200 million. But this may not be the case now.  Judge Beth Labson Freeman found “a pervasive pattern of misconduct” by Merck in the patent fight. A retired Merck scientist and lawyer “intentionally fabricated testimony” about early discoveries that led to the development of next-generation hepatitis C drugs, including Gilead’s blockbuster duo, Harvoni and Sovaldi, the ruling states. And Merck supported the “bad faith conduct,” the judge said. Merck says it plans to appeal Labson Freeman’s ruling indicating that it “does not reflect the facts of the case.”

Teva halts production at sterile injectables plant in Gödöllő (Hungary) after US FDA has banned most of its products from the US following an inspection at the facility in January. At the same time a notice by Hungary’s Food and Drug Administration (OGYE) says the action has taken 200 Hungarian products out of production and the agency has asked Teva for weekly updates so that it can avoid shortages, particularly of cancer and morphine drugs.

High-Tech Gründerfonds (HTGF), a seed investor set up in 2005 and backed by the German government, is raising €300 million for its third fund, with life sciences as one of the major target. Previous funding has allowed 440 companies to launch their programmes.

APinnov on June 14 in Paris (France)