Physicians at the Hackensack University Medical Center (NJ, USA) have confirmed the birth of the first baby born with Zika-linked microcephaly in the New York area. The mother is said to have contracted Zika while in Honduras and was admitted to the hospital while vacationing in the US.

On June 1, Sanofi announced that it submitted a written notice to Medivation's board requesting that it fix a record date to determine shareholders entitled to give their written consent to remove and replace each board member. The latest day the board can set the date is June 22. After this date, any board member can be replaced if consented to by a majority of shares. According to Medivation's bylaws, it is required to adopt a resolution fixing the record date within 10 calendar days after receiving the request. The record date, in turn, must be set no more than 10 days after the date of adopting the resolution. The company announced it did so earlier this week. Medivation shares closed at $60.80 on June 3, versus Sanofi’s $52.50/share offer.

Myriad Genetics (Salt Lake City, UT, USA) acquires Siemens spinout Sividon Diagnostics (Cologne, Germany) for up to €50 million and expects to launch Sividon’s EndoPreict test, which determines which breast cancer patients can safely receive a given chemotherapy, in the US during the second half the year. Under the terms of the deal Myriad will make a €35 million upfront payment and performance-based milestones of up to €15 million.

According to a BMI Research analyst, the proposed $62 billion Monsanto acquisition may indicate that Bayer plans to reduce its pharma R&D spending.

GlaxoSmithKline and Regulus Therapeutics (La Jolla, CA, USA) expand their collaboration for the development of RG-101 in combination with GSK2878175 for the treatment of patients with chronic hepatitis C infection.  RG-101 is a microRNA therapeutic, specifically a GalNAc-conjugated anti-microRNA targeting microRNA-122. GSK2878175 is a non-nucleoside NS5B polymerase inhibitor.

AstraZeneca licences rights to Zuramic, or lesinurad, a new gout treatment, to Grunenthal (Aachen, Germany) in Europe and Latin America. Under the terms of the deal Grunenthal will pay $230 million in various milestones and low double-digit royalties on sales.

Novartis teams up with Eisai (Tokyo, Japan) to co-promote Lenvima or lenvatinib, in the US just a few weeks after the US FDA approved it in combination with Afinitor, or everolimus, for the treatment of patients with advanced renal cell carcinoma. Each company will continue to book sales of its respective products.

DBV Technologies (Montrouge, France) and Nestlé Health Science (Vevey, Switzerland) enter a collaboration to develop and commercialize a novel diagnostic test for pediatric milk allergy. Under the terms of the Agreement, Nestlé will pay up to €100 million in various milestones and get access to DBV’s Ready-To-Use Test to Diagnose Allergy to Cow’s Milk Protein, based on its Viaskin® technology platform. DBV will use its patch technology to deliver epicutaneous immunotherapy–small quantities of proteins via intact skin to address allergies including to milk, peanuts and eggs. DBV is furthest along with its Viaskin Peanut product, which is in Phase III testing in the US.

a subcutaneous formulation of Roche’s MabThera SC, or rituximab, for the treatment of chronic lymphotic leukemia. "MabThera SC provides patients with significantly faster treatment administration and the opportunity to enjoy more time outside the clinical setting compared to intravenous delivery of the medicine," commented Sandra Horning, chief medical officer and head of Global Product Development at Roche.

Janssen’s thrice-monthly Trevicta, or paliperidone palmitate, making it the longest dosing interval treatment for an antipsychotic medication, in order to improve patients’ maintenance of the drug.

Samsung Bioepis’ biosimilar version of Johnson & Johnson’s Remicade or infliximab, marking its second anti-TNF-α therapy in the region. Bioepis is a joint venture between Samsung Biologics and Biogen. Biogen will handle marketing, commercialisation and distribution of the drug in the European Union and European Economic Area member states.

Biogen, AbbVie’s self-administered, under-the-skin injection, Zinbryta, or daclizumab, for treating relapsing forms of multiple sclerosis in patients who failed to respond to previous therapies although with a boxed warning. Zynbryta comes with more serious side effects than predecessor Avonex.

Intercept Pharmaceutical’s (New York City, NY, USA) Ocaliva, or obeticholic acid, for the treatment of primary biliary cirrhosis, an uncommon slow-progression liver disease and mainly affects women between the ages of 30 and 60. Intercept also studies the effect of Ocaliva in patients with nonalcoholic steatohepatitis, or NASH, another liver disease which is associated with obesity and more common than primary biliary cirrhosis.

Boehringer Ingelheim’s and Eli Lilly’s Jentadueto XR, a combination of linagliptin and metformin for the treatment of type 2 diabetes patients. The combination drug will be available in two dosages.

….and Roche’s cobas EGRF Mutation Test v2, as the first liquid biopsy companion diagnostic test with Tarceva. The diagnostic is a blood-based genetic test to detect epidermal growth factor receptor (EGFR) gene mutations in non-small cell lung cancer patients (NSCLC). EGFR testing, via biopsy, is currently being conducted on only about 25% of NSCLC patients which can be too invasive for very sick patients and tumor tissue can be difficult to biopsy effectively.

The European Commission expands Janssen’s Imbruvica, or ibrutinib’s indication to include all patients with untreated chronic lymphotic leukemia making it a first-line treatment for the disease.

US FDA expands the approval of Allergan’s (Dublin, Ireland) Tefalaro, or ceftaroline fosamil, for the treatment of acute bacterial skin and skin structure infection for pediatric use.

Six new medicines including two new combinations therapies have been recommended by the European Medicines Agency’s Committee for Medicinal Products for Human Use (CHMP), for approval:  Gilead's Epclusa (sofosbuvir/velpatasvir) and MSD's Zepatier (elbasvir/grazoprevir) as treatments for chronic hepatitis C infection. AstraZeneca's Qtern, a fixed-dose combination of the dipeptidyl peptidase 4 (DPP-4) inhibitor saxagliptin and the human sodium-glucose co-transporter 2 (SGLT2) dapagliflozin, as a treatment for type 2 diabetes.  As well as three new generic: Bortezomib Hospira (bortezomib) and Bortezomib Sun (bortezomib) for the treatment of multiple myeloma and mantle cell lymphoma; and Pemetrexed Fresenius Kabi (pemetrexed) for the treatment of unresectable malignant pleural mesothelioma and locally advanced or metastatic non-small cell lung cancer.

US FDA grants fast-track status to:

Soligenix’s (Princeton, NJ, USA) SGX943, or dusquetide, for the treatment of melioidosis, an infection caused by the antibiotic resistant bacterium Burkholediria pseudomallei. Dusquetide is a five amino acid innate defense regulator (IDR) peptide which has no direct antibiotic activity but modulates host responses, increasing survival and accelerating the resolution of tissue damage following exposure to pathogens.

Daiichi Sankyo (Tokyo, Japan) has announced that it will not proceed with the second part of its phase 3 study for its lung cancer drug patritumab as the investigational drug did not meet pre-defined efficacy criteria endpoints.

A team of scientist at the Medical University of South Carolina, led by Ann-Marie Broome, has identified a phospholipid nano-carrier, small enough to pass the blood brain barrier and potentially deliver chemotherapy to the brain. In the study published in Future Medicine, the team has used “a bit of fat globule” to carry the drug temozolomide into the brain and see an increased killing in glial cells.

A group of scientific, business and policy leaders announced their intent to launch The Genome Project-write (HGP-write) in 2016. As detailed in Science (http://science.sciencemag.org/cgi/doi/10.1126/science.aaf6850), the goal of HGP-write is to reduce the costs of engineering and testing large genomes, including a human genome, in cell lines, more than 1,000-fold within ten years, while developing new technologies and an ethical framework for genome-scale engineering as well as transformative medical applications. HGP-write will be implemented through a new, independent nonprofit organization, the Center of Excellence for Engineering Biology.

Roche is launching its PT/INR home self-testing device in Europe to help patients and doctors monitor coagulation and response to Vitamin K Antagonist (VKA) therapy. CoaguChek INRange, which includes Bluetooth technology offers an advantage over the current standard of care, where patients on VKA therapy have to visit the hospital or a doctor's office for PT/INR testing, and then wait up to 2-3 days for lab results, Roche's system uses a fingerstick and 60-second test to generate results.

Royal Philips (Amsterdam, The Netherlands) is ready to launch its connected medication dispenser Medido, its at-home senior sensor-based monitoring system, in Europe and in the US, after reporting dramatic increase in adherence rate from a 1,400 patient study conducted in the Netherlands. Overall, 96% of patients using Medido met the medication adherence rate target from the World Health Organization of 80%. In contrast, other studies have found that about half of chronic disease patients do not adhere to long-term therapy recommendations.

Protagen (Dortmund, Germany) launches its first CE marked diagnostic assays Multilisa® CENP-B and Multilisa® Scl-70 ELISA to aid in the diagnosis of Systemic Sclerosis, a systemic autoimmune disease that manifests as progressive fibrosis of the skin and internal organs. The disease is associated with the presence of several specific autoantibodies to intracellular targets which occur in around 80% of the patients.

Medtronic is preparing to submit the first artificial pancreas to the US FDA in the coming weeks.

The UK National Institute for Health and Care Excellence (NICE) has rejected Janssen’s Imbruvica for the treatment of Chronic Lymphocytic Leukemia. However, the Institute has asked Janssen to set out a case for including the drug on the UK Cancer Drugs Fund, to determine whether it could be funded for certain patients who carry a 17p deletion or TP53 mutation and who are not suitable for chemo-immunotherapy, while additional data on its use is collected.

Worldwide cancer drug spending could reach as much as $150 billion in 2020, up from $107 billion in 2015, according to a new report issued by IMS Institute for Healthcare Informatics. In this new examination IMS indicates that drug spending will increase between 7.5% and 10.5% annually through 2020. For 2015 alone, the worldwide cancer drug market grew 11.5% versus the year prior and growth in the US was 13.9%. The US accounts for almost 45% of the world’s cancer drug spending. IMS counted 20 different types of tumors that are now being treated by one or a combination of 70 cancer drugs launched in the last 5 years.

The American Society of Clinical Oncology (ASCO) has rolled out a new version of “the value framework” where it proposes a software tool to doctors to help patients make decisions about treatment. The biggest change comes in ASCO’s calculations of “Net Health Benefit” scores, which weigh a treatment’s benefits and side effects. The new framework also adds points for treatments that help control cancer in the long term for a “significant portion” of patients. It considers the full range of side effects linked to each treatment, rather than focusing on the most serious ones. Fast-growing drug costs are also the reason the latest iteration of ASCO’s method, like the former version, focuses only on cancer drugs, leaving out radiation therapy and other treatments.

American Hospital Association (AHA) Director of Policy Chantal Worzala said that a lack of data sharing continues to plague the industry. AHA hears "loud and clear" from its members that the systems they implement don't always share data. "We still don't have the infrastructure we need to support this change. It's just not a place where you can use one mechanism to meet all of your data sharing needs in an efficient and effective way." Worzala said.

Top 10 Pharma Companies Based on 2015 Revenue 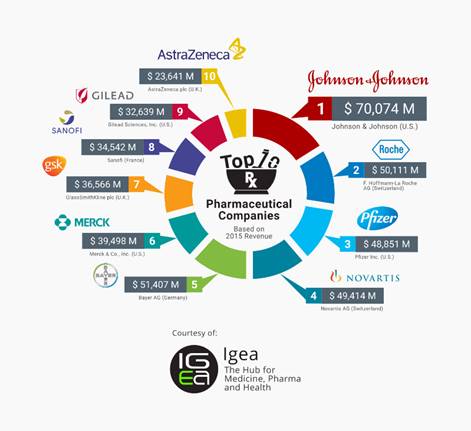 APinnov on June 14 in Paris (France)